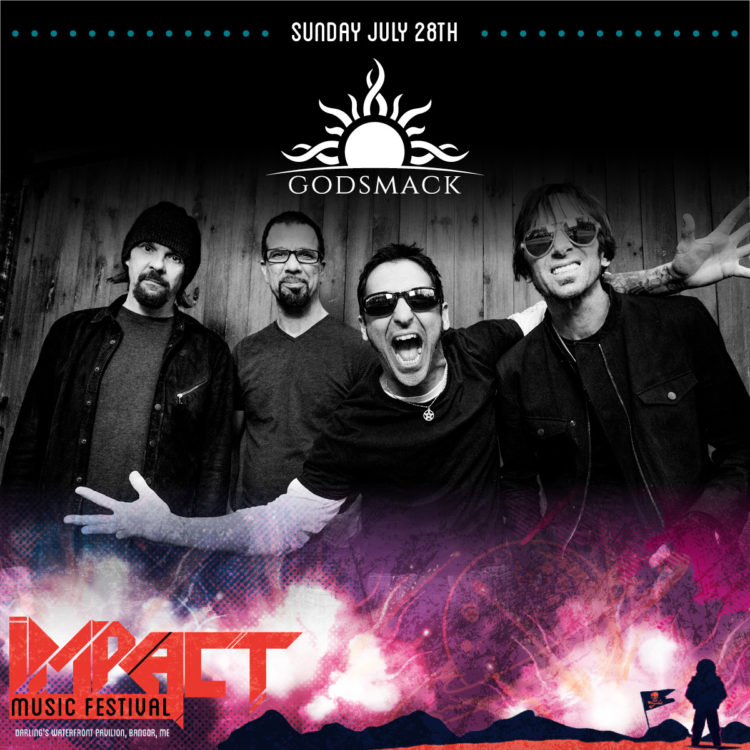 According to Greek mythology, the phoenix absorbs new life through rising from the ashes of its predecessor.

By the same token, we tear down the relics of the past in order to make way for the innovations of the future. As every rebirth requires reinvention, GODSMACK–Sully Erna [vocals, guitar], Tony Rombola [guitar], Robbie Merrill [bass], and Shannon Larkin [drums]–continues a similar cycle on their seventh full-length and debut for BMG, When Legends Rise.

Released in April 2018, When Legends Rise features the multiplatinum four-time GRAMMY® Award-nominated Boston bastion of hard rock raising its voice louder than ever on their first album in four years. The critically acclaimed 11-song collection, fueled by the #1 rock song and video for “Bulletproof,” plus the title track “When Legends Rise,” entered the Billboard Top 200 album chart in the top ten (#8), with four #1 placements on other charts: Top Rock Albums, Top Hard Music Albums, Top Independent Albums and Top Alternative Albums.

Following the album’s release, GODSMACK launched a 45-city co-headlining tour with Shinedown. The run started with a six-week outdoor amphitheater tour kicking off July 22 and included stops in Los Angeles, Las Vegas, Dallas, Atlanta and New York. The trek continued into the fall with arena shows and festival performances before concluding with a headlining slot at the sold-out Aftershock festival on October 13. The band will return to the road in 2019 with dates in the UK, Europe, North America and beyond.
###

“You’ve got to burn it down to build it up,” affirms Erna. “When Legends Rise is a metaphor. Life can get challenging at times. It can knock you onto the ground. However, if you reach inside of yourself, find that inner strength, and rise up again, you’ll flourish. Over the past few years, I went through a really tough time, but I learned this firsthand. Coming out on the other side, we’re going to do this bigger and better than we ever have. We’re ready to work.”

Truth is, the members of GODSMACK have never been afraid to put in the work…

Like the city they call home, these musicians speak louder, fight harder, and grow stronger each day. Through an uncompromising attitude and uncanny knack for a hummable hook, they quietly became one of modern rock’s most reliable and resonant institutions. Against all odds, the boys have broken one ceiling after another. They’ve landed seven number one singles on both the Billboard Mainstream & Active Rock charts. Most notably, they’ve earned 21 Top 10 hits at Active Rock–the most of any act since February 1999. Joining a prestigious club that includes Van Halen, U2, Metallica, Dave Matthews Band, and Linkin Park, they debuted at #1 on the Billboard Top 200 three consecutive times. Not to mention, they’ve sold over 20 million albums worldwide, garnered four GRAMMY® nods, and won “Rock Artist of the Year” at the Billboard Music Awards.

Following a marathon two-year tour cycle reunderlining their position as one of rock’s most explosive acts, the band made a conscious decision to approach writing from a different angle. For the first time, they welcomed collaborators into the process, including John Feldmann, Erik Ron, and longtime friend and Sevendust guitarist Clint Lowery.

As a result, the sonic palette expanded dramatically, while preserving the guttural GODSMACK grit synonymous with the group.

“I really wanted to open up this vein and reach for something fresh,” admits Erna. “Working together with these guys really got me going. I’m one of those people you can give a grain of sand to, and I’ll make a mountain out of it. A little push opened the floodgates. Their contributions allowed me to explore new melody styles. Personally and professionally, we’ve matured a lot. It was time for that kind of expansion.”

So impressed by Ron’s demos, Erna invited him back to GODSMACK Headquarters in Derry, New Hampshire in order to co-produce the 11 songs with him comprising When Legends Rise. Together, they unlocked an epic urgency evidenced within the title track and album opener.

A massive drum march and high-energy riffing give way to an empowering chant, “When ashes fall, legends rise.”

“I went through a pretty intense breakup,” the frontman recalls. “It wasn’t so much the breakup that banged me up as it was the aftermath. My eyes opened to things that were going on around me with family, friends, and people who I realized were bogging me down with drama and negativity. I made a conscious choice to shut it all off. Instead of leaning on another girl or alcohol to get me through it, I processed the pain organically this time. There’s an overarching theme of eliminating negativity and being guilt-free about it. When you build yourself back up in this way, that’s when the magic happens.”

The magic carries through the first single “Bulletproof.” Hinging on a massive and muscular groove, Erna’s voice takes hold during hypnotic verses before snapping into a stadium-size chant that’s impossible to shake.

“This addresses everything I went through head-on,” he goes on. “How many times can you endure this before you create that emotional wall? You don’t allow anyone else back in to potentially hurt you. When you’re betrayed, it kills. It’s like you can’t move forward without this person, because you were so attached. Once it goes away, you gain that strength and independence again. People see that glow when you’re on the rebound. They see you shine. You’ve enabled me to be bulletproof. You’re going to bounce off. I’m certainly not letting you back into this f***er.”

A wah-wah cry bleeds into the album’s most seismic and show-stopping refrain during “Unforgettable.” Everything culminates on a choir of local middle schoolers conducted by Erna–like his own “Another Brick in the Wall.”

“When I heard the melody in my head, it felt like a big singalong or like The Patriots could hopefully run out onto the field to it,” he laughs. “I’ve been working with this organization called C.A.T.S.–Community Alliance for Teen Safety–since like 2003. They put me in touch with this amazing group of twenty kids. They came to the studio, we got a bunch of pizza, and they sang it brilliantly. It’s really exciting.”

Elsewhere, piano and strings drive the heartfelt “Under Your Scars” as “Every Part of Me” trudges forward on ironclad intensity. Spurned by a jam session with Lowery, “Eye of the Storm” closes out this journey with a barrage of distortion, haunting vocals, a hypnotic solo, and the sound of roaring thunder.

“If you listen to this as a body of work, it ends with the sound of something to come,” grins Erna. “Who knows? It might just be another beginning for us.”

Regardless of what’s on the horizon, GODSMACK rise like never before here.

“When you listen to this album, just have some fun with it,” he leaves off. “That’s what music should do at the end of the day. There’s no doubt about it, this is a rock record through and through. This is also a Godsmack record.”

“When Legends Rise still hits hard enough to be identifiably Godsmack, but there’s a perceptibly smoother, hooky edge that was completely by design–and evident in songs such as “When Legends Rise” and the first single, “Bulletproof.’”
-–Gary Graff, Billboard (4/13/18)

“The band is painting with a broader palette and delivering one of their most well-rounded albums to date. When Legends Rise should give Godsmack an uptick in their career.”
-–Chad Childers, Loudwire (4/30/18)

“…the sonically intense, layered record [When Legends Rise] contains the signature Godsmack sound, while pushing the band to new limits of musical creativity at the same time…”
–James Wood, GuitarWorld.com, (4/11/18)

“When Legends Rise represents a conscious move toward the mainstream for the historically aggressive and streetwise outfit.…a collection of finely crafted arena rock that even the most hardcore Godsmack fans should love.”
–Ben Meyer, Modern Drummer, (9/20/18)