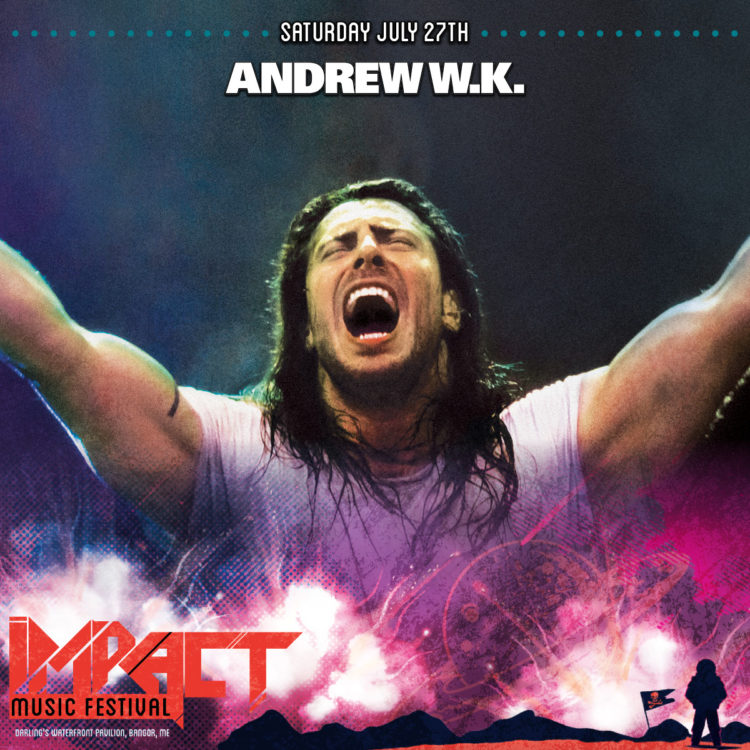 It all began with a feeling.
Of being alone and wanting to belong.
Of wanting to share that feeling of belonging.
And experience the euphoria of bonding with others.
The feeling became a dream.
To make the most exciting music imaginable.
Music that embraced and celebrated life in all its facets, electrifying and uniting everyone who heard it.
The dream attained reality in major chords pounded out on piano, an unrelenting four-to-the-floor beat, a set of dirty whites, a bloody nose.
And found its voice with these words:
“When it’s time to party, we will party hard.”
It’s safe to say, nobody has partied harder, longer or more fervently than the undisputed King of Partying himself, Andrew W.K.. A one-man music machine possessed of a single-minded, monomaniacal focus to spread a singular message:
That to party is to exist.
And to exist is to party.
This mission he embarked upon in 2001, with the release of his debut single and signature tune “Party Hard,” and has never swerved from since. Released the same year, his debut album I Get Wet, an instant, ageless classic, was a full-throated declaration of that hedonistic intent. Twelve songs, no ballads, delivered at breakneck speed and with maximum intensity from beginning to end. All the bluntness, passion and classicism of rock ‘n’ roll, boiled down and purified to its base elements.
Power. Movement. Melody. Emotion. Noise.
A sound simultaneously life-affirming, enervating and overwhelming.
A sound that obliterates ego and bludgeons self.
As an artist, he seemed to have emerged out of nowhere, fully-formed right out of the box, with an image, a style, and a sense of purpose that set him far apart from his peers. If that seemed to good to be true, then maybe it was. Andrew W.K., the critics opined, was either the savior of music or its biggest fraud. Either deadly serious or an elaborate prank. None of which bothered the fans who took up the mantle of the Andrew W.K. ethos, to live every moment as if it was simultaneously their first and their last. Live shows, backed by a six-piece band of hard-driving musicians, became a collective celebration of unbridled joy that often turned entire dance floors into a giant, whirling circle pit of jostling bodies, with sweat and hair flying, and ended in a mass stage invasion that tore down the boundary between artist and audience.
Two years later came The Wolf, an album that doubled as a manual for self-realization, blending the personal with the philosophical, drawing on the past to forge a path towards the future, then folding back on itself like a Möbius strip, invoking an existence with no beginning, no end, seamless. From this point on, his fans became his friends and allies in a cause undertaken purely for its own sake; an idea explored further in a 2004 MTV series, Your Friend, Andrew W.K., where he offered himself up as cheerleader and life coach, helping others to realize themselves and their dreams.
A third album in 2006, Close Calls With Brick Walls, as ambitious in scope and sound as it was oblique in theme and tone, suggested an artist who seemed to have freed himself from all the restrictions placed upon him, by himself and by others, who had peered into a looking glass and seen… his mirror image, staring back. Everything that he was and everything that he wasn’t, merged into one. A series of reflections arching backwards into infinity. Multiple images of a face with the same forced smile. As if Andrew W.K., the performer, had been replaced by a different person entirely.
The rumors that had persisted since the very beginning of his career, began to multiply and take hold, begging the question: not who is Andrew W.K., but what is Andrew W.K.? A person, a persona, a wig. An entity, a corporation or a symbol. An enigma behind a set of initials.
That question would remain unanswered as, over the next decade, Andrew W.K. adopted a dizzying array of roles that took him into virgin territory for a rock ‘n’ roll musician, establishing a unique place for himself in popular culture, as a ubiquitous celebrity presence, while at the same time calling into question the very nature of that celebrity. Advice columnist, university lecturer, and children’s game show host. Nightclub impresario, talk radio personality and talk show guest. Motivational speaker and cultural ambassador. Performance artist and magician’s assistant. Party philosopher and weatherman. He was all these things and more.
Now, as he readies the release of a brand new album of rock music, his first in over a decade, and prepares to embark on his first full-band tour in five years, Andrew W.K. has come full circle to celebrate a party still raging strong.
A party that is now and forevermore.
Because the party never dies.