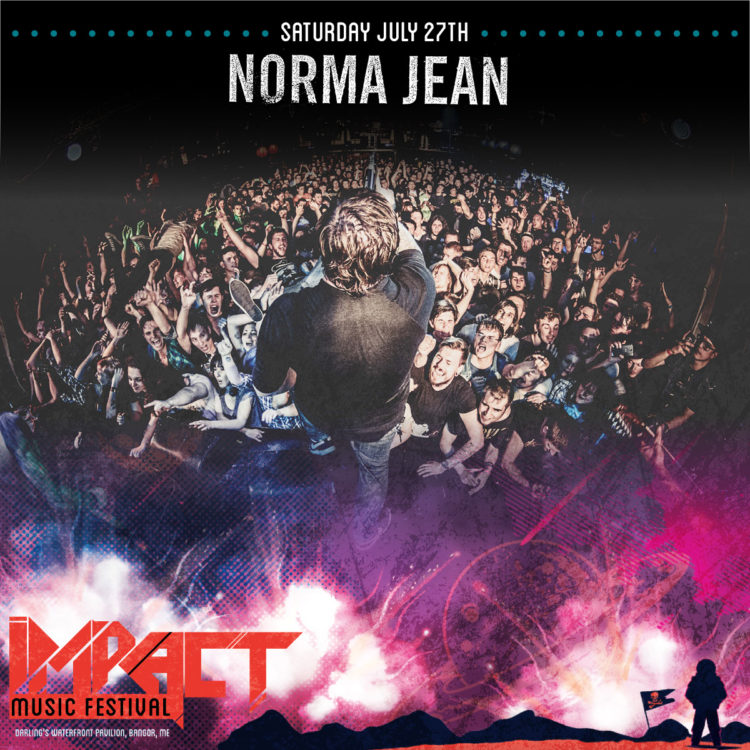 Nearly twenty years since the band’s conception, Norma Jean has continued to throttle forward, proving their legacy as musicians is not only deserved, but long-lasting. Although members have come and gone, the consistency of Norma Jean’s sound and tremor remains an immovable force, and their newest project, Polar Similar, is no exception.

They recorded their seventh full-length record in an isolated cabin while The Shining played on loop. Using the haunting chill of winter woods, the eerie acoustics from an indoor pool, and the unrelenting drive to capture natural, hollowed sound, the band stayed put until their album—a vulnerable, haunting accomplishment—was complete.

The record, out September 9th on Solid State Records, reminds us that Norma Jean is anything but rudimentary. “Sonically, we hoped to open minds to something different,” explains singer-songwriter, Cory Brandan. “It seems like the world has found the cookie cutter, microwaved form of everything, and we pushed ourselves really hard to be something else.” Decisions like recording at the Pachyderm Studio in Minnesota proves it. The studio (the same studio Nirvana recorded Utero in) aided in the cultivation of a sonically risky, supremely rewarding record. Each morning the band walked from the cabin to the backyard studio, turned on Stanley Kubrick’s isolation-themed thriller, and used the space’s acoustics to record audio that would end up so powerfully raw, it would need no added effects.

The finished product stacks itself atop a statuesque catalog of releases—one that yells just as powerfully, just as distinctly, and just as as profoundly as the ones preceding it. The theme, however, sets itself apart.

Polar Similar is about abuse.

“I have always been a little more cryptic when it comes to the content behind our lyrics,” confesses Brandan, “but I wanted to take a new approach with this record and be straight forward with the theme.” Inspired by a tumultuous relationship Brandan was previously in, this album is his most unguarded. “As a man, it wasn’t easy to face the reality of that abuse. Decades out of that relationship, I think it’s important to reach out to listeners who feel like I did then, who feel alone or different—like this has only happened to them—because the facts are that one in three women and one in four men will find themselves in abusive relationships in their lives,” he explains. “It’s not just physical abuse either—physical abuse is the product of an already abusive relationship. The record deals with all this in emotional detail.”

From the track “Everyone Talking Over Everyone Else,” an anthem about clawing yourself out of the cave of abusive relationships, to the song, “A Thousand Years A Minute,” which looks inside self-harm, to “Reaction,” a song dealing with the struggle to reach victims, Polar Similar exposes—honestly and masterfully— the jarring angles of relational abuse. “I hope fans can be reached through this,” notes Brandan. “It’s hard to know when you’re in an abusive situation; the most important thing is to know what the signs of abuse are and to take action.”

Although Polar Similar does distinguish itself from its predecessors in theme, all of Norma Jean’s albums are fastened together by unyielding talent and ingenuity. And, whether it be in artistry or society, their twenty year legacy will always carry with it one uncompromising approach: everyone deserves the best.